From the early morning hours of January 27, radio amateurs in Cuba’s capital of Havana were keeping an eye on the weather. An extratropical low-pressure system in the southeastern Gulf of Mexico associated with a cold front approaching from the west was preceded by a line of pre-frontal storms, generating severe weather conditions that deteriorated considerably that evening and into the night. Completely unexpected, though, was an F4 tornado that caused considerable damage in Havana. While hurricanes and tropical storms are fairly regular occurrences, the tornado was said to be the first ever to hit Havana.

“Once again, Amateur Radio operators proved how they could handle emergency traffic during the severe weather event, when the 2G and 3G mobile cellular phone systems collapsed due to damage and the excessive traffic generated by the event,” Radio Havana’s Arnie Coro, CO2KK, reported on his DXers Unlimited, Weekend Edition program. “Using the Havana Metropolitan Area main repeater on 145.190, stations with handheld FM transceiver[s] could keep in touch from even the most difficult places in the affected areas comprising the municipalities of Regla, San Miguel del Padrón, Habana del Este, and 10 de Octubre.”

According to media accounts, the storm, with winds approaching 260 MPH, left at least six dead and more than 200 injured; damage to homes and buildings was substantial. The severe weather also left much of Havana in darkness. 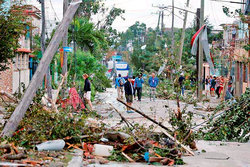 A Havana repeater on 145.33 MHz was pressed into service for the first time for this sort of event. A 144.410 MHz repeater in the affected area of 10 de Octubre proved very useful in handling traffic with medical workers, firefighters, and government emergency managers, Coro said in his broadcast.

More than a dozen radio amateurs responded to assist in the weather emergency, handling message traffic, a Federación de Radioaficionados de Cuba (FRC) report said. “It is worth mentioning the speed with which the emergency information was handled via radio, since everything happened so fast, complicated by a lack of electrical power, landline, and cell communication. [E]verything was in chaos. In seconds, everything stopped working,” the report added.

While power and telecommunications were promptly restored in many areas, repair or replacement of homes, buildings, and infrastructure lost in the severe storm will take a lot longer.